Flares of light catch our eye despite the crepuscular environments that resound throughout the work of Julien Heintz in Spectres of Memory. Often playing with a kind of subsuming shadow, Julien toys with an unsure cynicism. Faces are pulled and morphed; the image before us is squeegeed between our world and his. Colours in his painted works are translucent, building up layer by layer to an opaque neon which we catch at the painting’s focal point whether it be the star on a helmet, the bridge of a nose or the jut of a lower lip. He edges us into his range of vision- we get a sense of a world despite seeing so little of it. Favouring a lack of clarity in his technique, details are dismissed or disregarded; shrouded in a painterly mist. These works evoke that of spectres; we are dazzled by them as if caught in a strange glaring light. They function as memories- both departing and/ or approaching, being forgotten and/ or remembered. We’ve heard of a photographic memory- Julien imagines an approach to a painterly one.

Julien’s subject matter is both moody and ludic. Spectres of Memory comprises paintings overwhelmingly populated by figures. The faces materialise here and there, in and out of frame, confronting the viewer or looking -sometimes even facing- away. At times the featureless heads are embryonic, not yet a face, or perhaps a face that once was. We view them as if under murky water. There’s a recurring identity which takes form in the figure in uniform- the soldier, the diver, the person beneath the wide brimmed cap. While the notion of the Spectre holds haunting connotations, which a lot of these works do, the heads of the figures which we can’t wholly see are unfixed personas. They’re no one we know- more signifiers of a person - an ambulant character, peregrinating through visual culture. A hooded man, a masked face, a transmutable identity.

Julien often mixes his own pigments. There is an innate interest in the mixology of such a process- the science of these swirling interactions from this material to that, to that to that, ad infinitum. In Soldat, test nucléaire 1966, materiality makes itself evident in his sparing brushstrokes which rely on the grain of the canvas beneath in order to soak into the direction they so happen to. The menacing figures are fuzzy and mute seeing to it that the feeling of foreboding which their look and their garb implies, mellows. A certain truth to the medium is central to each picture- the brushstrokes mar our view despite being the very reason the image lies before us. The same applies even to his graphic monoprints which have a coagulated scrawl to them; making out the definition feels deliberately difficult. But there is no stress present, in fact there’s an overwhelming calm emanating throughout the work.

Coelentérés being the name for ‘marine animals with a hollow body cavity’- jellyfish, coral, anemones, echoes the nature Julien’s paintings at large have on our vision. We look at the subject of the large work as if we were ourselves diving without goggles. Blue Planet and the like now have HD vision to perfection, but capturing a microscopic majesty in paint would harken back to a nineteenth century Ernst Haeckel- esque pursuit of science. Julien uses the medium of painting for what it is- a wet liquid. Colours and forms shift and pulsate- one into the other. We are unsure as to whether the aquatic creature(s) we see before us are really there or merely a figment of projected underwater fear; a lurking presence that never comes to reveal itself, deciding instead to leave us to each our own subaquatic agendas.

Ubiquitous throughout the exhibition is the sense of scale, perhaps one of the last things one notices. The faces are so big; they envelop the picture plane, dragged out and distorted like in the blue- green head in Sans titre (2022). Or the faceless torso which recurs a couple of times on the exhibition walls- a body outstretched, a grandiose upscaling. Instead of a feeling of intimacy which a close-up would imply, the image is beset by the screen of fog endowed by the application of paint, forcing a distance between us and them. The torso is also yet another cropped body, maintaining the air of intrigue to the subjects in Julien’s work; we will never wholly know. We never can wholly know- this is simply solipsism (the problem of other minds). The presence of unknown others and things of spectral memories. Julien’s illusive spectres leave us spellbound. 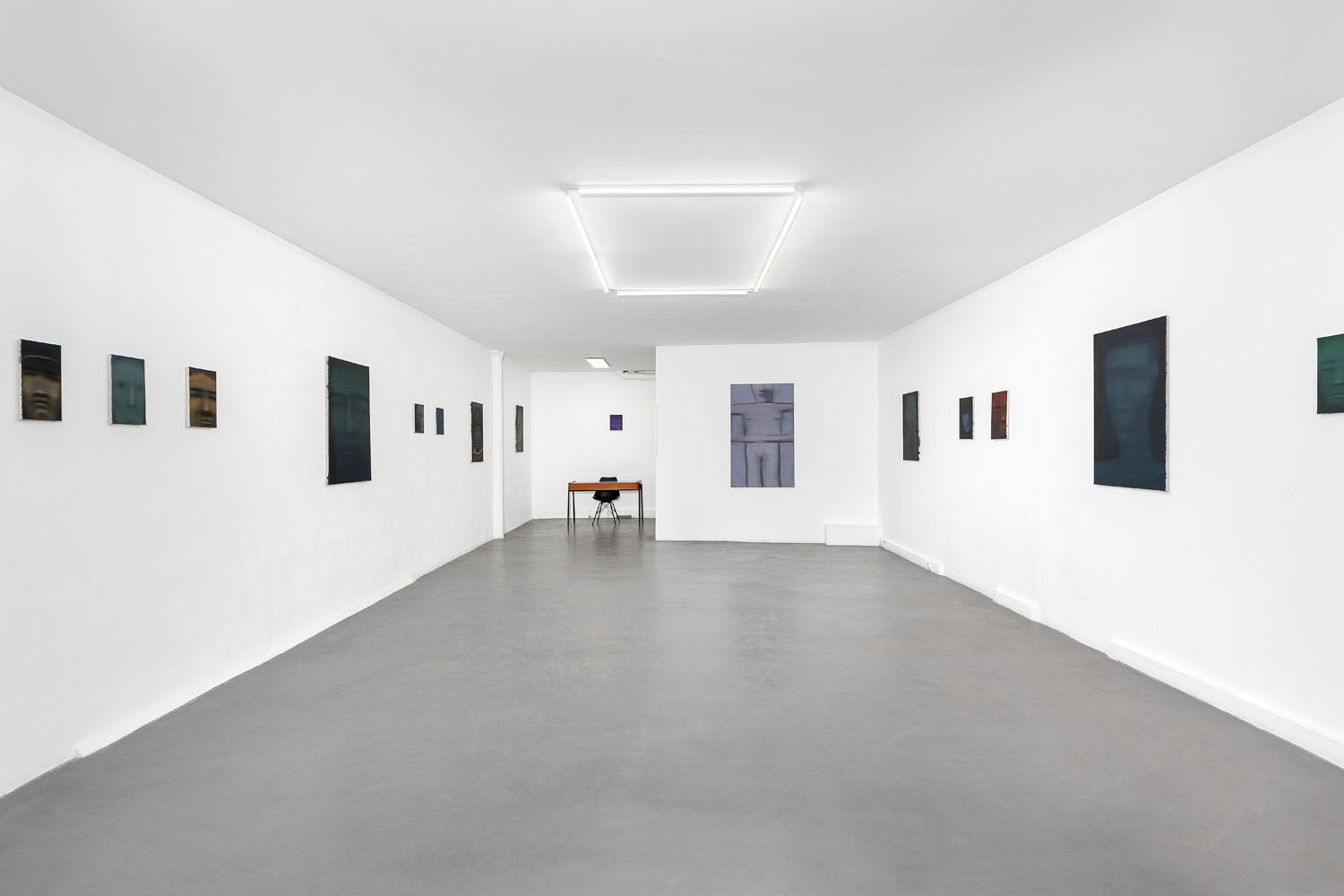 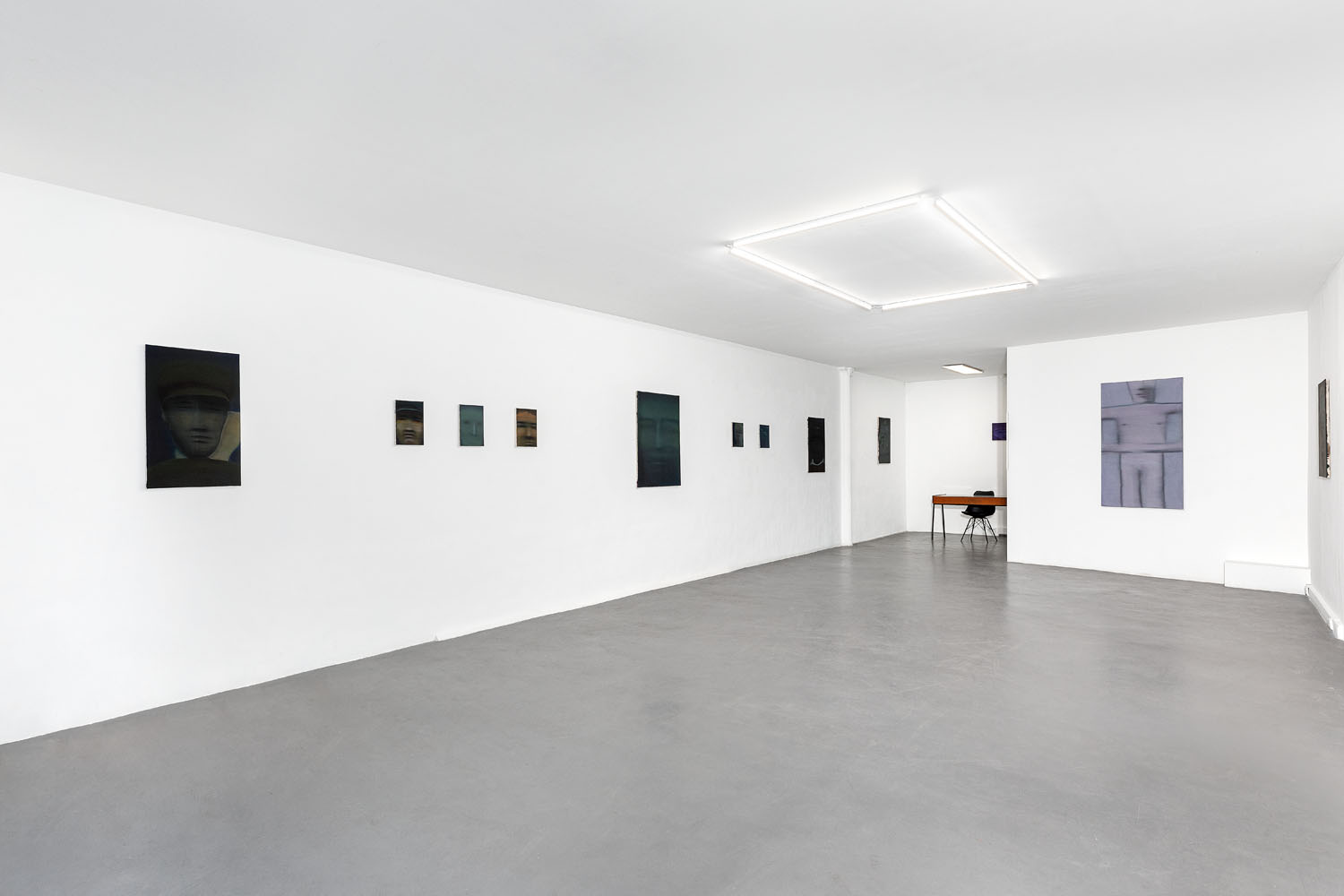 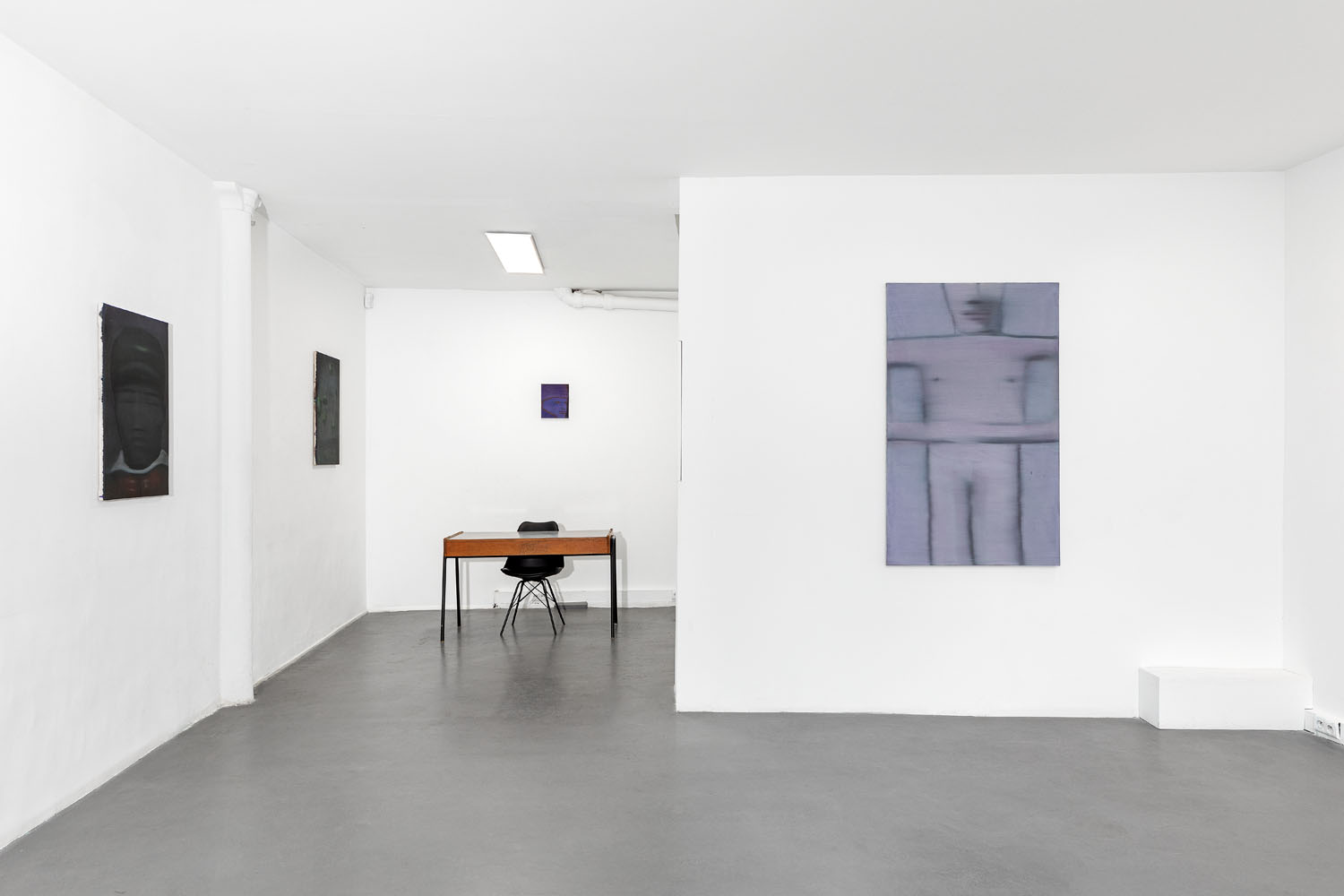 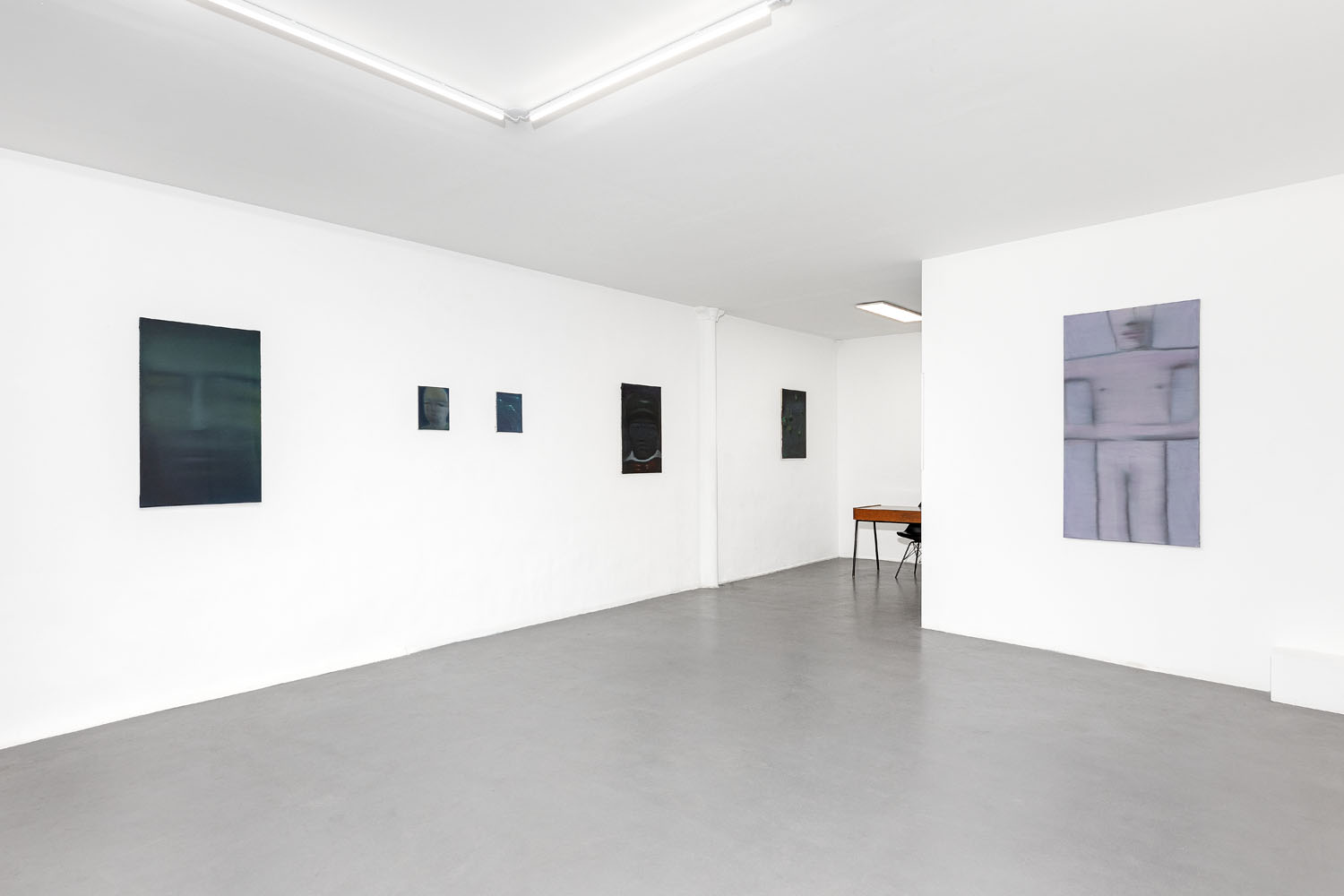 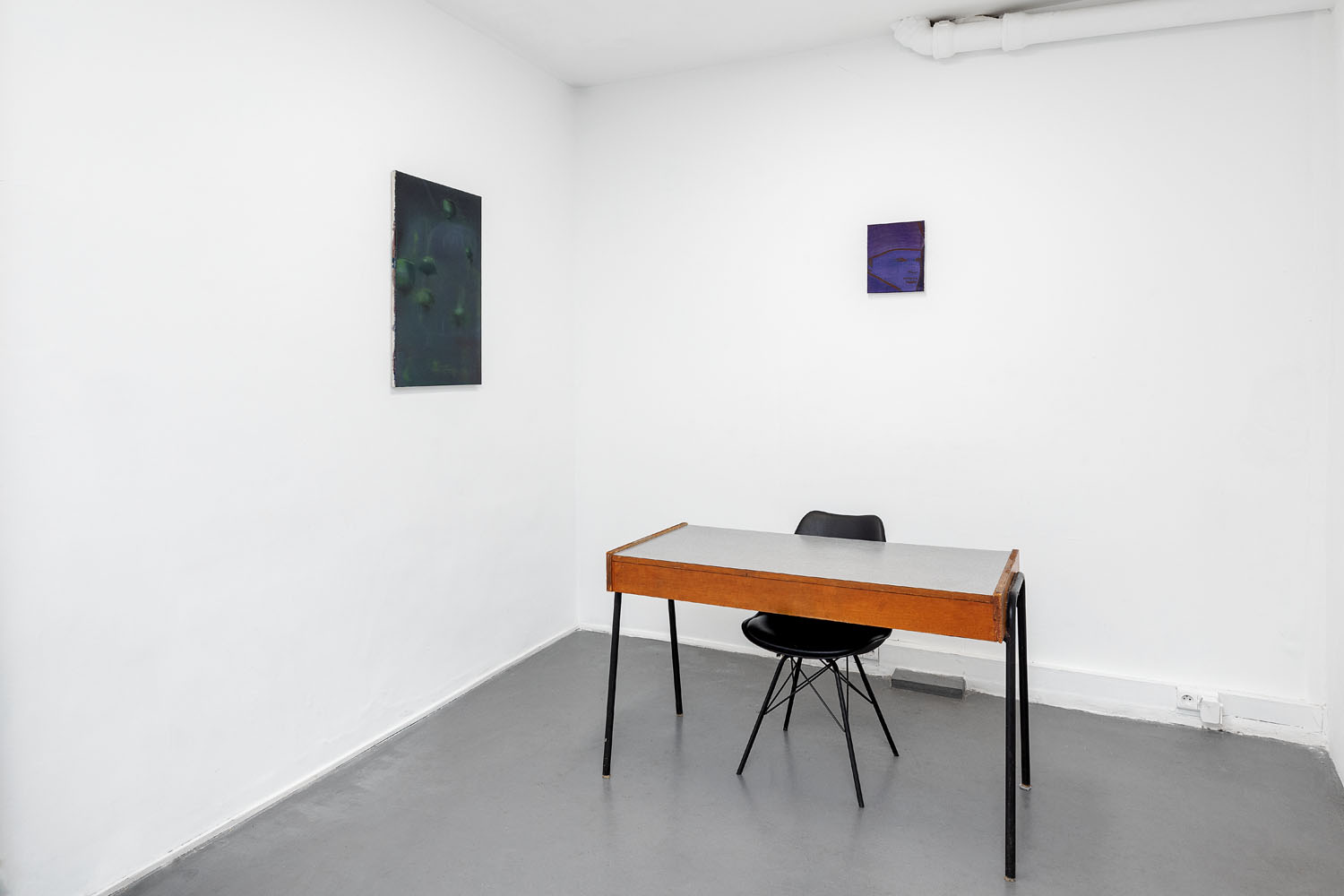